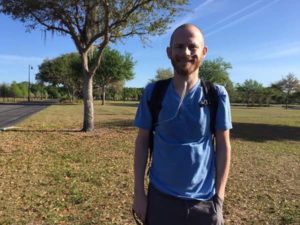 The long and short of this week has been that everyone in the house appears to be sick except for me. Boy brought something home over a week ago. I took him to Wednesday church, but that was the last day he was acceptable to be with other kids. I started massive toddler nose-wiping on Friday and moved the hand sanitizer next to me and the Kleenex box. By Sunday, he wanted to learn how to use the hand sanitizer. Rub, rub, rub!

We skipped Easter services – my wife went alone on Saturday evening and I pulled up the live service Sunday on my iPad and used AirPlay to watch on the TV. Unless there’s a hospitalization as a kid I’m not remembering, that was my first missed Easter in person.

Feels like I should have been getting new lungs for that personal record falling. #grin

We head to clinic on Wednesday morning. They need to see me monthly now for lung function tests and a new tissue type blood sample. I’m sure I’ll cough up something that grows a need for more oral or IV meds. Ideally, I’d like to see a more or less stable situation with a 1-2% point drop in lung function, just to keep the need real.

We’d noticed an issue since the second day we got an updated concentrator. We asked for a new one because the first one was too noisy and the beep it made when it turned on was like a shriek. The replacement wasn’t too much quieter but the beep was still loud but at least half the volume. Well, this one would start at 3L and drop to 2L within a couple of hours, and after a while, it just gave up and would be running 1.5L or less after 12 hours. I started getting headaches again and using tanks for couple of days.

We got a replacement that is the same model, but we can crank it all the way to 5L and it holds steady. The next day my headache was gone. I’ve since upped my home level to 4L and I run a pretty consistent 96%-98% saturation now. I run 3L when we’re out on a large tank and crank it to 5-6L while walking from place to place. 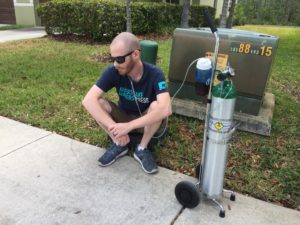 Being listed for transplant, you sign a contract with your Center to be 100% compliant with your treatment plan. They told me to be sure I keep up with exercise because after surgery, you aren’t able to push yourself up from a chair with your arms – you have to do a seated squat to rise.

My legs, while they have lost mass, have not been my problem with my decline, as my recovery will show everyone, but I’m still compliant.

My wife walks two neighbors’ dogs for extra money, so our plan was for me to join her each day at 11:30 to do the 1/4 mile walk to our first client’s townhome & have me grab our mail from the community mailboxes and catch my breath.

Walking there was fine. We even talked halfway there on 5L/min (I can’t believe I’m saying this next part). Then I stop responding because it’s time to breathe for me to get there. Yeah, no talking and walking.

On the way back, I was already silent starting out. 2/3 of the way home, I felt my saturation levels drop, my legs got sluggish, and I looked for the closest spot and said, “Stop. Catch. My. Breath.”

“You can’t even walk home? Stop sucking,” she joked (yes, she’s allowed to joke this way without hurting my feelings because I’m putting strain on her).

After 60-90 seconds, I felt my head return to normal and we strolled along, hand-in-hand now.

In our driveway, I let her go ahead to open the door and I staggered and paused in the drive before deciding to go inside instead of taking another break outside with my tank.

So after 2-3 weeks of difficulty after my feeding tube surgery, I’m back in business and back doing business. It was a good week, especially since I didn’t get sick, even though I didn’t feel well enough to go to Easter services. I did make it on Wednesday night, which ended up being more walking than the previous Sunday morning.

Meta data and the incredible database

Warning: this is very geeky and technical, but I think I explained it well enough for anyone who is interested in the donation waiting list.

Because I’m such a geek, I wanted to spend some time illustrating how cool the waiting list database is. If you recall a couple of years ago when the whole Edward Snowden thing broke out, everyone was talking about meta data. People were saying things like, “Why do I care if they know call times, duration, incoming and outgoing numbers, and some GPS data? It’s all anonymous.” Yes, a lot of data is anonymous, but with enough data, you can create a fingerprint or portrait, no different than putting together a puzzle that is unrecognizable by looking at any single or small number of pieces.

But this isn’t about call monitoring, it’s about the date of listing, organs, transplant centers, blood type, age, LAS, disease diagnosis, etc. With enough of those data points and enough filtering, you can find specific people. Another set of data would be just as effective for me, such as: age, gender, marital status, car situation, home situation, city, and career industry (employer would be a VERY small set). I doubt there are any other 38yo married males with a 2000 Altima living in a townhome in Tampa who is a WordPress developer. Very unlikely. 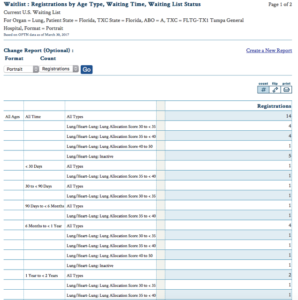 So about 14 days after I was listed, I ran a report on the database. It showed me that at Tampa, there were only 14 people waiting for lungs with my blood type. However, five were inactive, so that leaves nine. Four had a lower LAS than I do and I was grouped with four. One had a higher score category.

When you read down a little further in the report, you see them broken down by wait time. There was only one listed fewer than 30 days: ME. I ran this report with the LAS reporting so I could verify that the person in that time bracket had my score. Verified. You can click or tap the image to zoom in or get a full-size image.

Today is the day we’ve been waiting for ever since: the day I’d roll off the <30 bracket into 30-<90 days. You’ll notice in the first report that there was one person with an LAS of 30-<35. I played around with building the report different ways and found a nice, concise format. 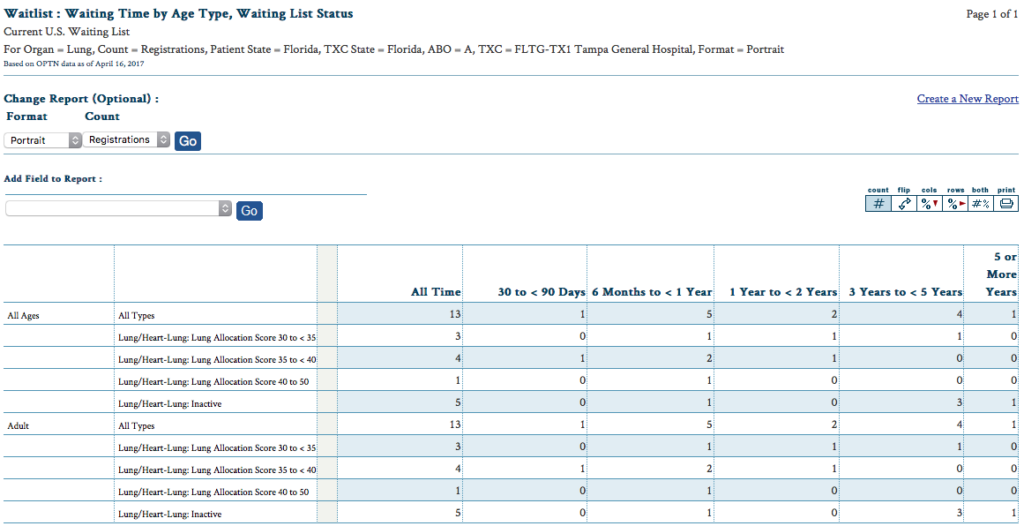 Sorry for the size, but I wanted to preserve the query and date at the top instead of the most narrow view.

If you want that, here it is. Within the 30-<90 day range, there is one person, they have an LAS of 35-<40, and they have cystic fibrosis. Hmmm, that must be me since there is now NO LONGER anyone waiting for <30 days. You can also see that the 90 days – <6 months category is gone (because it’s empty) and the next bracket gained a person in the same LAS range as the one who left the 90d-<6m bracket  from the previous report period.

Unless someone is added to my blood type for lungs in the next 60 days, I’ll be alone in each bracket until the 6 months to a year bracket. I hope you enjoyed this data half as much as I do.